Representation of a Person

We are a part of a wider world and take ideas from the people around us. We sometimes translate these ideas into action and these actions influence the way people see us.

An artist takes in the elements from the world around them and translates these into texts that can be read by people beyond their immediate circle. These texts set new boundaries and create new connections, reinventing the world of the people who listen, read or view them.

To say that the self is a construction may seem an artificial way of referring to the process that goes into texts about real people and real events. You may think that because the person is real, the story must be real and that therefore a documentary is not a construct. But this fails to take into account the deliberate choices made as the text is created.

There are many types of texts that are about real people including biographies, autobiographies, memoirs, documentaries, reality shows. These don’t simply recount the events of a person’s life; the author carefully selects details from that life and constructs a story that is believable and that projects a powerful message. The process can therefore be regarded as a construction, building up a picture from different elements.

The title of the documentary, PAUL KELLY — STORIES OF ME, immediately suggests the relationship between the self and story. We are all made up of the different stories that we tell about ourselves and that others tell about us. The documentary maker uses the skills of a filmmaker and the techniques of a researcher to trace the life story of Paul Kelly. Like a historian he questions different people to find out the facts, he uses archival material, photos, newspapers, old films. All of this is juxtaposed with what Paul Kelly says himself.

No life story is told without some sense of creativity. We all filter reality through our own perception of the world, perceptions which are not entirely objective but shaped by our experience, our culture and our language. Even an expert observer like Patrick White asks of himself, “is the novelist in me taking over?” Carmel Bird writes that it is difficult to stop fact and fiction merging and that “non-fiction runs into trouble when it starts inventing things”. All of these are considerations for the documentary filmmaker who needs to balance the ‘real’ with the ‘story’.

In the documentary, Paul Kelly is represented as many selves:

Can you see other ways in which he is represented in the film?

A biography is the representation of someone’s life, charting the influences of childhood, place, mentors and defining experiences. The genre is commonly seen as non-fiction as it is based on evidence (writing, memories, images, comments by people who know the person). However, this evidence is interpreted through the perspective of the biographer, or in this case, the film maker.

Biographies about artists and writers can be a very complex version of the form. Because an artist’s work can be so much an expression of the self, biographers must consider the nature of the artist’s work and the ways it has been received by audiences and critics. In fact, the life is often less important than the work and is considered in terms of how it influences the work.

Childhood, growing up and family

Even in ancient times and the Renaissance period biographers wrote about famous people. They were interested in showing that promise was evident even in childhood. It is said, for example, that Alexander the Great had the power to subdue even the most savage horse in his childhood. More recently, some biographers and autobiographers have been more concerned with showing that success can emerge against adversity. Success in adulthood is achieved after a struggle against extreme poverty or disability. Others however, portray childhood as a magical age which leaves one with a sense of loss. Childhood, therefore, becomes a memory which one carries throughout one’s life.

How does the focus on and representations of Paul Kelly’s childhood and family shape our attitudes towards him? What “Australian values” are being represented here?

In the opening scene, Paul Kelly reflects about his Nonna’s notion of singing stating ‘thinking about singing — all the different ways of singing, and singing for me not just meaning singing but moaning, crying, pleading, praising, whooping, shouting, talking, whispering, calling, cajoling, defying”.

Write your own definition of what singing means to you.

There are many different definitions of singing that exist such as

Then listen to the opening track of ‘Dumb Things’ and write a description of how Paul Kelly sings this song.

Which of the words from the text above and your reflections upon the different definitions of ‘singing’ would best describe his style of musical delivery?

In music, instruments can take on different roles or functions in the music, they may present the main tune or melody (voice), they may provide an accompaniment which supports the melody (keyboard), or provide a form of rhythmic drive and support throughout the song (drum kit).

List the different instruments that you can see and hear being performed on stage and briefly outline their function in the song ‘Dumb Things’.

The place of birth or growing up is often imbued with powerful memories. The home can be a place to escape or a place of refuge. Often the subject will return to face the memories.

The only way we can make sense of our lives is with the use of memory but even memory is not completely reliable.  In looking back over our lives we reinterpret that life in the light of present knowledge.  Some authors make it clear that they are reinterpreting their lives but others claim they are delivering their life seamlessly.

Deciding moments in a life story

In any stories about the self we try to find patterns.  Often we locate certain moments in our lives which become turning points altering the previously established pattern.

The portrayal of character

Use the graphic below to analyse the different ways the documentary reveals “Paul Kelly”. 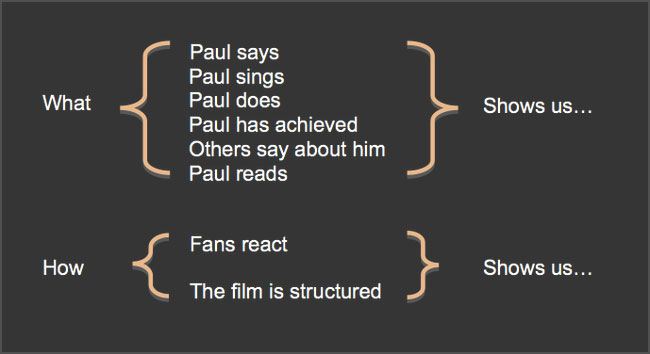 Despite this multifaceted presentation of a personality, we often try to bring this together into a coherent image of a person. We ask ourselves such questions as:

The fundamental question is the one he avoided answering himself: who is he?

NEXT:
REPRESENTATION OF A PERSON / BIOGRAPHY AND NARRATIVE
Please respect the photographer: Photography is protected under Copyright Law.